Face recognition attendance, GPS positioning, cashless payment... Recently, it was revealed that an intelligent school uniform was being tried out in more than ten primary and secondary schools in Southwest China, which attracted hot discussion and attention.

According to the manufacturer, after the chips are placed in the shoulders on both sides of the school uniform, this smart school uniform has the functions of insensitive attendance, educational administration management, home school communication and so on, aiming to build a smart campus.

But on the other hand, the questions of "more and more monitoring restrictions infringe on students' privacy" and "how to use the collected sensitive data" also follow.

In this regard, recently, lidaoguo, the legal representative of the company involved in the research and development of this school uniform, responded to the surging news that whether to use the smart school uniform is up to parents and schools. At present, the "all-weather monitoring" has not been implemented for students. The positioning function only meets the needs of individual parents and has not been fully promoted. The data security is also checked by the public security department.

With regard to the upgraded functions being developed by the smart school uniform, such as "detecting students' dozing in class" and "parents' checking their children's consumption at school through their mobile phones", liuyongmou, a professor at the school of philosophy of Renmin University of China, told surging news that minors also have independent human dignity. When using the smart school uniform, their privacy must be fully considered.

Liuyongmou said that the educational concept of comprehensively monitoring and cultivating citizens with sound personality, self-respect, self-improvement, self-discipline and self-confidence is in conflict. It is a simple, rough and lazy method, which has more disadvantages than advantages in education. Therefore, he proposed that in the dispute over smart school uniforms, laws and regulations are also needed to protect them. "When schools, parents and producers may infringe upon minors' privacy rights, the government, the state and society need to intervene to further make clear provisions on the production and use of smart school uniforms to protect minors."

In September, 2017, the students of Renhuai No. 11 middle school in Guizhou Province became one of the first batch of tasters of this smart school uniform.

According to the school's official website, this is a boarding junior middle school located at the junction of urban and rural areas, with nearly 1000 students. Zhoudakun, the principal of the school, told surging news that a total of 200 students in the fourth grade of the school are using this smart school uniform.

This "smart school uniform" developed by a technology company in Guizhou is no different from ordinary school uniforms in style and appearance. According to the manufacturer, the name, class and facial picture of the corresponding students are recorded on the chip of each school uniform. It integrates technologies such as RFID, infrared sensing, fingerprint recognition and face recognition, and combines with supporting equipment such as access control probe and app client.

For example, through the face recognition gate at the school or dormitory gate, the system will automatically recognize face information when people enter and leave; At the same time, the screen of the guard room will pop up the matching student's picture, and record and push the exact time of the student's daily access and 20 second real-time video to the mobile client of parents and teachers in real time.

According to the manufacturer's assumption, there is no need to call the roll, and it can monitor whether students play truant, are late, and don't go home at night. If there is a person who cannot be recognized, or a student sneaks out of the door, the system will voice broadcast to remind the guard to strengthen management.

For this smart school uniform, the public has the most controversy about the function of "GPS can locate the whereabouts of students in real time".

In this regard, liduoguo, the legal representative and general manager of the company that developed the school uniform, told surging news that the GPS locator, whose main functions are track viewing and one click alarm, has not been integrated into the clothing. "We combine this function with the school logo. It is a paid customized service and will not promote the positioning function to the school. Some parents have this demand and need to locate outside the school. They will purchase and install it separately."

How to prevent the student and parent data collected by smart uniforms from being abused?

Li Daduo said that the collected data can be divided into two categories, such as leave and academic performance, which will be retained in the background for a long time. However, video data similar to students' access to the school gate will be covered after one to three months under normal circumstances.

In terms of data security, liduoguo said that parents must pass the real name authentication to see the situation of their children, and outsiders cannot read it. The local public security department has strict supervision over the enterprises that do data. A single technician cannot log in to the company's background, and multiple passwords are required to log in at the same time. The data itself can only serve students and parents.

Li Daduo said that in 2015, the company settled in Guiyang high tech Zone, the "China big data industry base", and launched this smart school uniform in July 2017.

According to the surging news on the company's official website, in April and June 2018, the head of the Education Bureau of Nanming District of Guiyang city and the principals of several primary schools visited the company's "smart school uniform" project.

In this regard, liduoguo said that the main consumers of school uniforms are parents and are not funded by the Education Bureau. However, some education departments have expressed interest in the project. "If a school uses this product, we will provide a management interface for the local education department to realize data sharing and strengthen the supervision of the education department over the school."

"Students wearing smart school uniforms have been approved by the school and their parents. In general, it is up to the parents' committee to decide whether to use them. Now parents may pay the most attention to the safety of their children. Even if some students reject some functions, they can only consult their parents. We only provide service functions, and how to choose to use them is up to the parents and the school." Li said.

Li said that next, the upgrade function of the smart school uniform also includes: "detecting" that when students doze off in class, the alarm will sound automatically; Students realize "cashless payment" in school through fingerprint, finger vein and face recognition. Parents can check their children's daily consumption in school at any time through mobile phones and control their children's daily consumption limit; Monitor the physical condition of the child in real time. If there is a large fluctuation, send a prompt to the teacher and parents. At the same time, record the daily exercise volume, heart rate and other data of the child, and analyze the growth, development and physical fitness of the child.

According to the company's official website, at present, 11 primary and secondary schools are using this uniform, including 10 in Guizhou Province and 1 from Guangxi. Li said that more than 20000 students are actually using it.

Expert: Students' privacy and personal dignity should be fully considered

In the era of Internet of things, there is no unified consensus on the standards and norms of information security. After the smart school uniform came into the public view, there were questions about some of its functions. On the one hand, do more and more testing restrictions violate students' privacy rights? Will it affect the child's mental health? On the other hand, how to protect the sensitive data collected by the platform? Who will supervise?

On February 3, Professor liuyongmou, School of philosophy, Renmin University of China, told surging news that the privacy information of minors collected by smart uniform manufacturing enterprises can easily be leaked to the commercial sector, rather than simply for educational purposes. Laws and regulations in this regard must be more strictly blocked.

In terms of data protection, Yu Chao, a lawyer of Jingheng law firm, also believes that the law is more effective than the third-party supervision itself, because regulators may also disclose privacy.

He said that the most effective way to stop an illegal act is to increase the illegal cost. When violating citizens' privacy and even facing criminal punishment, the violator should also calculate the crime cost.

For minors, it is worth discussing whether parents' more control of their own life information through smart products is an invasion of privacy or due guardianship.

In response to this problem, liuyongmou said that the law of the people's Republic of China on the protection of minors clearly stipulates the guiding principle of "respecting the personal dignity of minors". In the issue of smart school uniforms, the protection of minors' privacy must be fully considered. Minors also have independent human dignity. Schools and guardians have the responsibility of education as well as the responsibility of protecting the guardian's privacy from infringement, especially in the name of education.

However, he also pointed out that as far as the existing ethical tradition is concerned, compared with Europe and the United States, Chinese parents are used to "acting as agents" for their children's affairs. However, Chinese ethics does not claim that parents can decide all their children's affairs. In particular, middle school students have more ethical self-determination rights. Therefore, on issues such as smart school uniforms, liuyongmou believes that as a core stakeholder, students cannot be deprived of their right to speak. "There is no doubt that guardianship and minors' privacy have their own boundaries, and minors' privacy cannot be deprived by guardianship. Of course, where this boundary lies needs to be discussed in detail in reality."

"If parents invade their children's lives without borders, I firmly oppose it." Dai Yingpin, director of the Institute of mental health management of Wuhan University (Shenzhen), also agreed with Liu yongmou. She said, "children have the right to choose, rather than live according to their parents' wishes. After losing autonomy, children's growth space becomes smaller, their creativity is limited, and it will become more difficult to handle affairs independently."

Dai Yingpin said that from the perspective of mental health, the biggest problem in the parent-child relationship of Chinese families is the blurring of boundaries. Commercial products tend to please the payers. Smart school uniforms save parents' effort and gain more power, which makes it easy to overreact. Informatization and big data often form a kind of power, which creates an unconscious in-depth control over people in it. Children are not prisoners. Especially in adolescence, parents are directly authorized to use subjective consciousness to excessively interfere with their lives and stimulate rebellious psychology without control.

She was also skeptical about the customized positioning function: "is it really reasonable that even her own children can get the function of monitoring the location as long as they pay?" According to lawyer Yu Chao, this is a balance between the security protection and privacy of minors. He suggested that in some special cases, value trade-offs should be made. "For example, if a child is missing, it will be found that it is necessary to transfer some of his privacy rights.".

"The problem of children's human dignity is something we didn't take into account when making product innovation." Li said that this time we have heard some different voices and will reflect after seeing some comments. 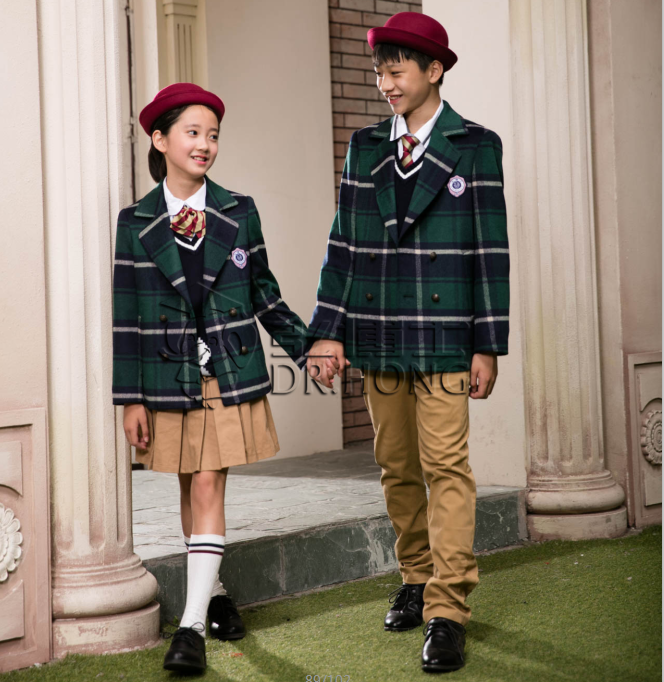 Why do students wear custom uniforms